Transitioning from the relational world to the beautiful world of graphs requires a shift in thinking about data. Although graphs are often much more intuitive than tables, there are certain mistakes people tend to make when modelling their data as a graph for the first time. In this article, we look at one common source of confusion: bidirectional relationships.

One common mistake people often make when modelling their domain in Neo4j is creating both types of relationships. Since one relationship implies the other, this is wasteful, both in terms of space and traversal time. Neo4j can traverse relationships in both directions. More importantly, thanks to the way Neo4j organizes its data, the speed of traversal does not depend on the direction of the relationships being traversed.

Some relationships, on the other hand, are naturally bidirectional. A classic example is Facebook or real-life friendship. This relationship is mutual - when someone is your friend, you are (hopefully) his friend, too. Depending on how we look at the model, we could also say such relationship is undirected.

GraphAware and Neo Technology are partner companies. Since this is a mutual relationship, we could model it as bidirectional or undirected relationship, respectively. 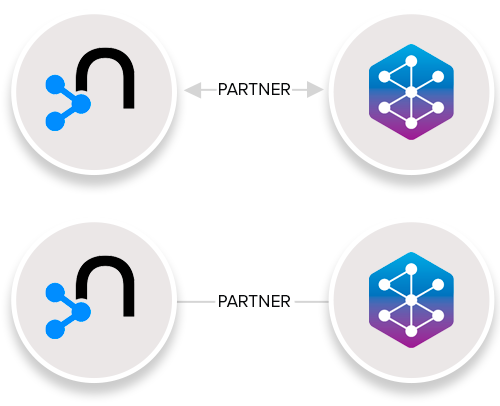 But since none of this is directly possible in Neo4j, beginners often resort to the following model, which suffers from the exact same problem as the incorrect ice hockey model: an extra unnecessary relationship.

Neo4j APIs allow developers to completely ignore relationship direction when querying the graph, if they so desire. For example, in Neo4j’s own query language, Cypher, the key part of a query finding all partner companies of Neo Technology would look something like

The result would be the same as executing and merging the results of the following two different queries:

Therefore, the correct (or at least most efficient) way of modelling the partner relationships is using a single PARTNER relationship with an arbitrary direction.

Relationships in Neo4j can be traversed in both directions with the same speed. Moreover, direction can be completely ignored. Therefore, there is no need to create two different relationships between nodes, if one implies the other.