Recently, Neo Technology announced the 2.3.0-RC1 release of their Neo4j graph database. One of the key new features is Triadic Selection built into Cypher’s Cost Based Planner. In this blog post, we will explore the Triadic Selection in detail and demonstrate how significantly it can speed up recommendations computed in Neo4j.

What is Triadic Selection?

A Bit of Theory: Triadic Closure

Networks or graphs can rarely be considered static structures. On the contrary, often they seem to be ever-evolving objects. Any social network, for example, is often the most dynamic of graphs: at any moment, new relationships are created between existing nodes, other relationships vanish, new nodes appear and others are deleted. It is therefore crucial to observe how the network evolves over time.

The forces that operate on each network vary over various network types, but one of the most basic principles is the following:

“If two people in a social network have a friend in common, then there is an increased likelihood that they will become friends themselves at some point in the future. [Anatole Rapoport. Spread of information through a population with socio-structural bias I: Assumption of transitivity. Bulletin of Mathematical Biophysics, December 1953 ]”

We refer to this principle as triadic closure. It is intuitive and really simple to find examples of in everyone’s private network. Moreover, experience suggests three basic principles of how triadic closures operate:

Furthermore, the basic role of triadic closure in a social network has motivated the formulation of simple social network measures to capture its prevalence. One of these measures is the clustering coefficient.

The clustering coefficient of a node A is defined as the probability that two randomly selected connections of A are connected each other [Easley D., Kleinberg J. - Networks, Crowds and Markets. Reasoning about a Highly Connected World. Cambridge Press, 2010].

In recommendations engines, triadic closure represents an interesting opportunity for evolution of the network, because in most applications, closing a triangle has a positive impact on the state of the world. 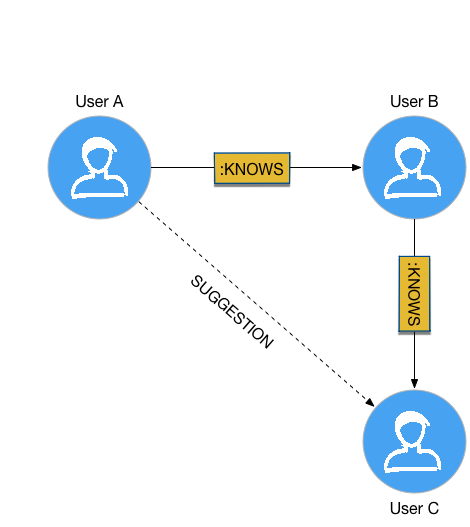 This does not seem to be a complicated query nor does there seem to by anything special about it. So what is this all about then?

Well, the good news is that in Neo4j 2.3, Cypher is optimized to make use of TriadicSelection just by recognizing the closure pattern in your query. Let’s take a look at the PROFILE of this query :

Our simple Cypher example was a negative predicate meaning that we are looking for triangles that are not yet closed.

Cypher also allows you to look for positive predicates, meaning triangles that are already closed. A slight modification to the WHERE clause will do just that:

The key point of TriadicSelection is that the predicate pattern WHERE NOT (a)-[:FOLLOWS]->(c) needs to have the same direction, type and labels as the first part of the MATCH pattern MATCH (a:User)-[:FOLLOWS]->(b).

So b and c need to have the same labels. Triadic re-expresses the problem as find all (c) that are not in the set of (b) which is only a reasonable re-expression if the set of found (b) is a superset of possible (c).

As Neo4j experts and enthusiasts, we could not resist the temptation to test the performance impact TriadicSelection has on more representative data sets. If the performance improvements are significant, this might be a feature to take into account when it comes to data modeling or building new recommendation engines in the future.

The tests were run on an AWS EC2 m3.xlarge instance.

Here, the difference is not significant because there are only 200 Person nodes.

We ran this test on 100k different users. As you can see in the table, the improvement in the query response time is really significant : from 331 seconds to 1010ms.

The query times are generally proportional to the number of suggestions the TriadicSelection will find.

Again, the performance impact is very significant and will certainly benefit the Neo4j users.

You can find the code used for the tests in our stress-test repository.

We’re looking forward to meeting you at GraphConnect in San Francisco. If you want to know more about the Github dataset, Christophe will do a lightning talk titled : Mining the Github Activity in Neo4j.

Also, do not miss Michal’s talk : Real Time Recommendations with Graphs and the Future of Search.

NB: Thanks to Craig Taverner from Neo Technology for useful information about the TriadicSelection internals in Neo4j.