In this 3-part series “Know what you know: Competing on Analytics with Knowledge Graphs” Dr. Alessandro Negro, Chief Scientist at GraphAware, walks you through analytics, knowledge graphs and its “competition”.

Very recently I read an interesting book, “Competing on Analytics: The new science of winning” by Thomas H. Davenport and Jeanne G. Harris. I recommend it to everybody that wants to have a full picture of how critical analytics are to succeed – especially in highly competitive markets. From the very start, the concepts are very well expressed in this new edition of the Harvard business best seller. Therefore, it resonated with me because they were perfectly in line with the concerns, sentiments and questions of many of the customers ringing at GraphAware’s doorbell.

There is one customer, in particular, I remember well. His words inspired the title of this blog post. He was the desperate owner of a company calling us because he had his company growing at lightning speed and he felt he was losing control over it. During the call, he said: “Help me! I need to know what I know”. He knew that he had a lot of relevant information sitting somewhere in several data silos in different formats, in many documents – some of which were still on physical paper – and, even worse, in the heads of people. Information about the business, about the customers, about the providers was there but he could not access it in a meaningful way. He could not use it to bring his business to the next level, supporting their customers by providing better products or services to them. Knowledge was locked down and completely inaccessible.

This was one of the many that reached out to us with very similar stories. Stories of frustrations, failure, and disappointment. He was the one able to draw the main issue in a few words. After many years of supporting different companies, we have identified some common patterns not only in the type of issues, but also in the consciousness about them and, luckily, in the type of solutions that can be adopted.

The Davenport and Harris book, released in this second edition late in 2017, covers many of these patterns. I would like to start from those and extend them, providing some steps and elements more in the direction that the authors identify as a clear path to success for many big and mid-size companies. It is worth noting that what is presented in the book as well as the “extensions” in this blog post apply very well to a wide spectrum of companies (if not to all) at different stages of their journey. 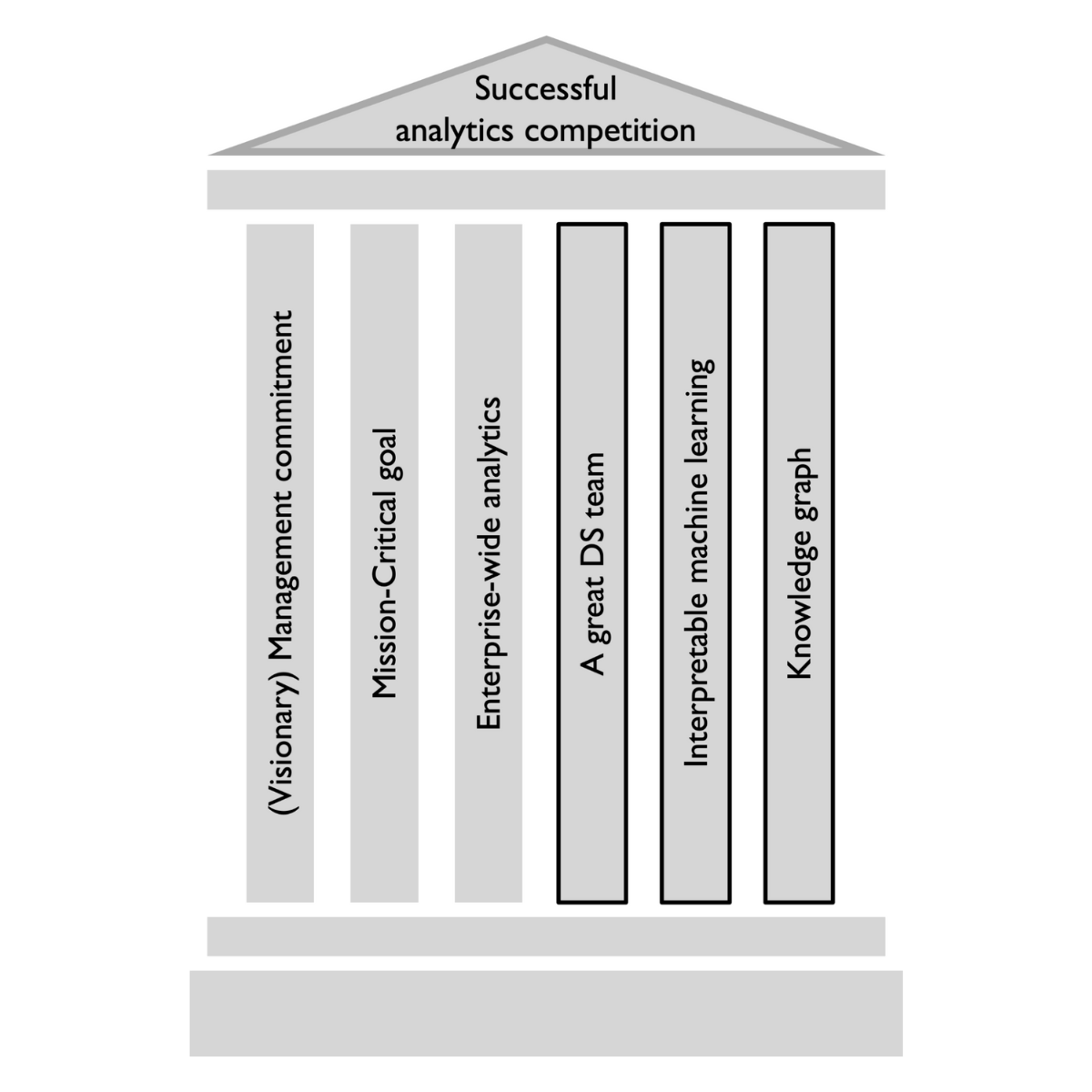 As in any very good recipe, let’s start with the main ingredients and then we will discuss how to mix them together:

I hope this article will inspire more visionary managers to start this journey.

Why compete on analytics?

First things first, we should shape the context by defining analytics. Analytics generally refers to the extensive use of data, statistical and quantitative analysis, explanatory and predictive models, and fact-based management to drive – internally – decisions or actions and – externally – specific set of services. Analytics never replaces humans in strategic decisions. In this case, they have an advisory role, helping humans to make decisions. In other use cases, analytics models can make autonomous decisions, like recommending something to the end-user.

In a global market, where unique geographical advantages and protective regulations don’t matter anymore – or are largely gone –, many of the traditional bases for competition are no longer available. Companies from many industries and sectors offer similar products and use the same technologies. Under these circumstances, there are few other elements that can help you compete:

Analytics can support almost any business process and can help create distinctive product and service offerings. This is unbelievably true in any business across the globe.

Among the many common patterns we can recognise in successful companies and, in particular, in companies that succeeded in analytical competition (supposing that there could be other types of competition out there right now), there is one that from my point of view is the most critical (as also mentioned in the Davenport’s book as part of the DELTA model [1]):

A visionary and committed leadership team who understand the importance of analytics and constantly advocate for their development and use in decision, actions and products.

It is the most important because it is the real, unique key to success and it is the hardest to achieve.

The competition in analytics not only helps a company to survive but it definitely drives success in highly competitive markets. There are plenty of success stories out there, but I would like to mention a few to give you an idea of how much analytics creates disruptive advantages, even when the competitors are giants. These examples reveal a common pattern: all these organisations used analytics for mission-critical tasks.

I have to disclaim that this is definitely my favourite story, not only because I’m a happy customer, but also because I started my career in the analytics field by building a recommendation engine and Netflix was a great case study. In 1997, Blockbuster was already drawing more than $ 3 billion per year in revenue, with thousands of physical stores across the globe. At that time it could have appeared crazy that someone, like Reed Hastings, started a new company, Netflix, that offered to rent movies online and deliver them using US Postal Service. The key to the success of Netflix, which has grown from $5 million in revenue in 1999 to $8.3 billion in 2016 and caused, most probably, the failure of Blockbuster, was its capability to compete on the basis of its mathematical, statistical and data management prowess. First and foremost, their proprietary recommendation algorithm analyses customers’ choices and customer feedback on the movie they have viewed and recommends movies in a way that optimises the customer’s taste while keeping the business needs into account. A standard recommendation algorithm would recommend movies in high demand, but in this way delivering the same bestseller movies could be delayed, so the algorithm often recommends movies that fit in the customer’s preference but aren’t in high demand. This helped them to serve more customers, making them happy and at the same time better distributing how movies are rented. With time, Netflix used analytics for many different business goals even for the creation of content. The most interesting example is the original series, House of Cards. This successful political drama has been “designed” using an analytics algorithm that identifies the most relevant “attributes” – plot details, genre, actors, etc. – to maximise the audience.

Netflix is a sort of classic in this field, I cannot avoid mentioning it even because at that time analytics was not a formalised concept. History tends to repeat itself. Stop for a moment and think: would you create a new social network while Facebook, Instagram, LinkedIn and Twitter “take hostage” more than half of the human population? Even Google tried some time ago and failed, do you even remember Google+?. Well, TikTok founder, Zhang Yiming, did it. Have you ever asked yourself what is TikTok’s secret for keeping young people watching it for hours every day? TikTok has been downloaded three billion times around the globe, a critical milestone only Facebook apps have previously achieved.

The secret sauce of its success relies on - you bet, analytics. The video-sharing app’s most popular feature is the For You feed, advertised as an “endless stream of short videos that feel personalised just for you.” TikTok specified that the three main factors fuelling its recommendation system are user interactions, video information, and device and account settings. Of course, the details of the recommendation algorithms are closely guarded by TikTok’s parent company ByteDance. At the Wall Street Journal, reporters created dozens of fake accounts as part of an investigation to uncover how the algorithm exactly works. They discovered that watch time — more than likes or shares — is the most important piece of information that TikTok collects[2].

At this point I can hear some of you saying, ok this works for online-based companies, my business is different, I don’t have enough data, or my customers are different. To address these legitimate concerns, let me give you a completely different example. Something completely unrelated. Analytical competition is also advancing in international sports. AC Milan, an Italian Soccer team that is one of the most storied teams in Europe, uses predictive models to prevent player injuries by analysing physiological, orthopaedic, and psychological data from a variety of sources. Milan Lab identifies the risk factors that are most likely to be associated with an injury for each player. The lab also assesses potential players to add to the team. Several members of the 2006 FIFA World Cup-winning Italy national team trained at Milan Lab. Even though the data is not generated “online” the amount of data to be processed is enormous even in this case. Think about a single player moving on a soccer field with a ball for a single minute, then multiplying it by 22 players and then for 90 minutes.

Law enforcement by its nature will always face the impossible challenge of optimising the deployment of the limited resources, like patrolling officers and pursuing auditors, across the territory a police department has to cover. Police departments use analytics to “compete” against criminals. They leverage such systems to predict the location of crimes and to direct policemen to patrol those areas. In 2011, the Chief Information Officer of the Richmond Police Department revealed during a conference that they leveraged a crime prediction system to mark up maps by the risk of imminent crime and to list precincts, neighbourhoods, and crime types by risk level. Since this system’s deployment, crime rates have decreased. After such a success, similar systems have been used in many other departments including Chicago and Los Angeles [3].

In the next part of the series, we will discuss the stages of the revolution of analytics.